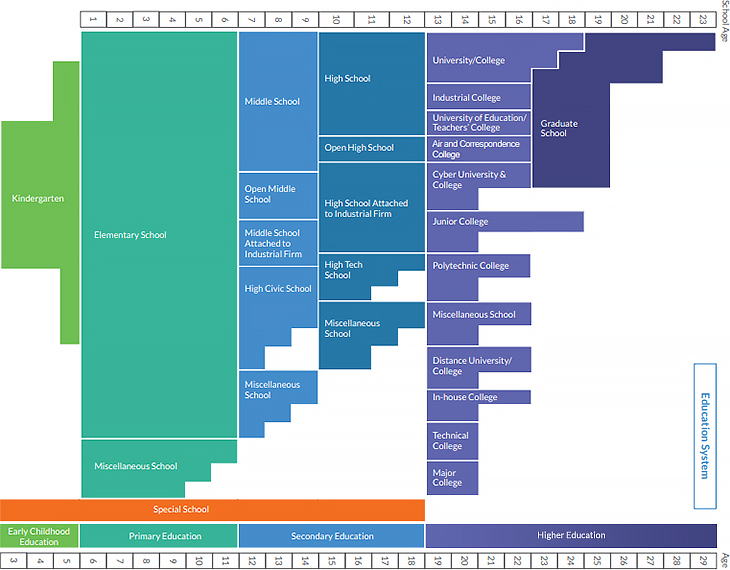 The school system follows a 6+3+3 model and consists of six years of primary education (elementary school, age 6-12), three years of lower secondary education (middle school, age 12-15), and three years of upper secondary education (high school, age 15-18). The first nine years of schooling (elementary and lower secondary school) is compulsory. A school should meet the establishment standards prescribed by Presidential Decree, such as facilities and equipment and obtain authorization from the Superintendent of an Office of Education which belongs to a City, a Do, or a Province. Schools are classified into national schools, public schools, private schools according to the founding entities. The Minister of Education determines basic matters on standards and details of the curricula and the Superintendent of an Office of Education may determine the standards and details thereof according to actual circumstances of a region within the scope of the curricula determined by the Minister of Education.

Higher education institutions in Korea consist of junior colleges (2~3-year courses), universities (4-year courses) and graduate schools. A Junior college confers an associate degree. If a person who was admitted to an advanced major program or a 4-year course designed to train medical personnel and has completed the courses determined by school regulations, junior college could award a bachelor's degree. In recent years, with the development of information and communication technologies, cyber colleges that deliver education via of e-learning have also increased in number. Graduate-level courses (master's and doctor‘s degree courses) are generally provided at 4-year universities. However, graduate school universities have established to exclusively offer graduate programs with no affiliations to universities.

The medium of instruction is generally Korean. The foreigners’ school and international high school offer school curricula in other languages.

The UNESCO Institute for Statistics(UIS), the official statistical agency of UNESCO, developed the International Standard Classification of Education(ISCED) in the 1970s to collect and analyze internationally comparable educational statistics and revised it in 1997 and in 2011. As UNESCO has recommended the use of ISCED to each country, the Statistics Korea enacted the Korean Standard Classification of Education(KSCED) in 2009. After revision in 2014, it was publicly notified.

Overall responsibility for education in the Republic of Korea lies with the Ministry of Education. Korean higher education has its legal basis in the Higher Education Act and other related laws.


For further information, please refer to the link below